The government’s new National Data Strategy promises “major and radical changes” in its use of data – setting out plans to promote those changes by introducing new tools, levers and organisations at the centre of government. To better understand civil servants’ perspectives on the data agenda, NTT DATA commissioned a survey asking their views on the opportunities and barriers around data use; the progress made by their departments to date; and how leaders should act to hasten progress, both at the departmental level and across government.

The survey ran for five weeks to 20 November 2020, gathering responses from 346 civil servants – nearly half of them in the Senior Civil Service (SCS) and Grades 6-7 (G6-7). As well as the ‘whole group’ data, we have analysed the responses of eight sub-groups: SCS, G6-7 and ‘other grades’ staff; HMRC and DWP employees; and members of the Project Delivery, Operational Delivery and Policy professions. Only a tiny proportion of respondents worked in the centre of government (meaning Number 10, the Cabinet Office and HM Treasury) or in the Digital, Data and Technology profession (DDAT). So our findings broadly represent the views of non-digital staff working in the ‘line’ departments.

How important is this agenda?

Civil servants overwhelmingly recognise the need to make better use of data: some 63% believe that doing so is ‘absolutely essential’ to improving public services and staff tools, while a further 30% say that it’s ‘very important’. SCS are still more enthusiastic, with some 75% saying it’s ‘absolutely essential’.

How do you want to improve data use in tools, services and decision-making?

Asked to name the fields in which they’re most keen to make better use of data, civil servants put evidence-based policymaking at the top of the list – with 65% of respondents including it among their top three priorities. Second is targeting services at the points of greatest need. Third, providing a single point of access to multiple, interlinked services. And fourth, assessing the impact of public spending and service delivery.

How advanced is your employer’s use of data?

Most civil service bodies seem to be making fair progress on developing the policies and systems to make better use of data: about 40% of those expressing a view said their employers have already created many of the required capabilities, and a further 25% that they’re implementing improvement plans. But the results highlight a long tail of organisations that have apparently made little progress, while many officials are hazy on the policy framework – with half unable to say whether their employer has a published data strategy.

How can civil service organisations hasten progress on data?

Here, the most popular answer was: ‘Strong and visible leadership on data, supported by an active data strategy’ – closely followed by introducing data standards, establishing a data management framework, and investing in the DDAT workforce. Most groups broadly agreed on this list of priorities, though Project Delivery professionals asked for business planning, spending approval and programme management systems to be rebuilt around the needs of digital technologies – putting this option at the top of their list.

How should the centre of government promote better use of data?

Civil servants overwhelmingly backed action by the centre of government to promote better use of data, showing strong support for almost all of the actions and policies named in our survey. These included key planks of the Data Strategy – include the launch of a central data-sharing platform and the introduction of mandatory data standards – as well as other options, such as legislative changes and investing in DDAT staff training. Asked whether the centre of government should win additional powers to promote compliance with data policies, respondents backed the idea by three to one. In general, junior staff and those working in Operational Delivery or Project Delivery were the most supportive of stronger central action; SCS and Policy professionals were the most sceptical. But across the board, the picture is one of robust demand for strong central leadership on the civil service’s use of data. Key messages Civil servants clearly recognise the importance and value of making better use of data, and many of their goals align with those of the government’s Data Strategy. Data maturity varies across government – with many organisations in the early stages of developing their data strategies – and there is strong support for action by the centre of government to drive progress, for example by introducing mandatory data standards and creating a data-sharing platform. Staff are clearly concerned about their organisations’ DDAT capabilities – calling for investment, training and salary flexibilities to strengthen the specialist workforce – but the Data Strategy appears to be pushing at an open door: civil servants both understand the agenda’s importance, and broadly support the government’s proposals to enhance central direction and leadership. On the civil service’s use of data, the greatest challenge now facing government is that of delivering on its stated goals. 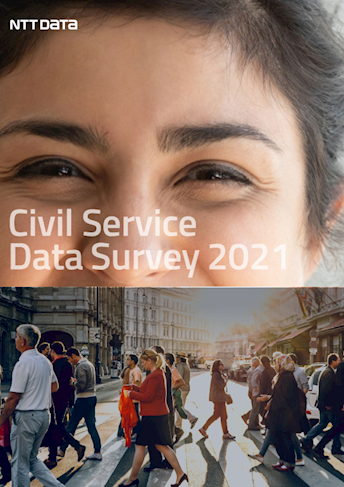 The City Gives Back: supporting service workers in their time of need