NTT DATA has helped the Crown Prosecution Service (CPS) to modernise its payment scheme for barristers by applying advanced data analysis to detail the changing nature of today’s legal cases.

As new technologies have been introduced, legal cases have become more complex, increasing the typical workload of self-employed barristers who represent the CPS in the Crown Court. Barristers felt that due to the changing nature of criminal prosecution work the previous payment scheme no longer reflected the amount of work that needed to be carried out.

The earlier payment scheme relied on ‘uplifts’ to provide additional disbursements for cases that demanded extra work. Developed at a time where cases involved receiving a physical bundle of evidence, these payments were based on simple metrics such as the number of pages in a case file or the number of defendants.

However, they did not always provide adequate compensation for the time and effort that a barrister expended. In particular, it was hypothesised that the proliferation of electronic evidence, such as CCTV footage and mobile phone records, generated a massive pool of extra information that needed reviewing. Recognising that an update of the scheme was needed, the CPS conducted a review of casework over the preceding 12 months, looking at internal systems and police records to collate information on about 5% of the annual Crown Court caseload – around 3,000 cases.

“NTT DATA is proud of the engagement with the CPS and the Bar’s representative bodies on this very important initiative. This project further highlights the strengthening links between data, technology and policy across Government. We are pleased that we were able to draw insights and intelligence through data modelling that led to an agreeable outcome for the CPS and the Bar.”

The CPS asked NTT DATA to turn a vast pool of data into usable information to help revamp the payment scheme.

The CPS then approached NTT DATA to help turn this vast pool of data into usable information that could provide the insight needed to revamp the payment scheme. We first cleaned the data, restructuring it in a data platform so that it was easy to understand. The next step was to upload the clean data into Power BI, the Microsoft business intelligence tool. This allowed us to map trends and patterns, generating insights about the volume and complexity of cases, which were presented as easy-to-follow tables and graphs; ultimately testing and verifying hypotheses.

We then supported the CPS in a series of roadshows to present the evidence to barristers around the country and gain feedback about what was working, and what was not when it came to their payments. Our ability to flexibly update data reports as required during discussions with barristers revealed new insights. This enabled all parties to better understand the true nature of today’s legal casework and how the payment scheme could more accurately mirror the new reality.

The data showed that the volume of prosecution pages in a case still accurately reflected the amount of work involved, and that the uplift based on this was still broadly working as intended. It also showed that electronic material had little impact in most cases, so there was no need to make a new payment to account for this. However, the data insights did reveal a clear need for an extra payment to barristers to take into account the large volume of additional material that doesn’t end up in court. In addition, while there was already an uplift in place to account for the extra work posed by multiple defendants, the evidence showed that it likely was not adequate.

CPS can now conduct own reviews

Presented with this proof, the CPS and Bar’s representative bodies successfully reached an agreement to overhaul the payment scheme with a deal which is both fair and affordable. The data insights, alongside an interactive financial model from us that allowed the CPS to cost the package ‘in real time’, enabled the two bodies to reach a deal quickly, avoiding the need for protracted negotiations.

The CPS has secured value for money for the taxpayer, while the Bar Council can be confident that payments properly reflect the hard work of its members. With an eye to the future, we also trained CPS personnel to make full use of Power BI, so that similar exercises can be carried out in-house during future reviews of barrister fees. In addition, the extra insights will help the CPS with forecasting and budgeting.

“The data analysis and business intelligence provided by NTT DATA gave us real insights into the working of our payment scheme. This helped us achieve improvements that provide better value for the taxpayer and a fair outcome for members of the Bar Council.” 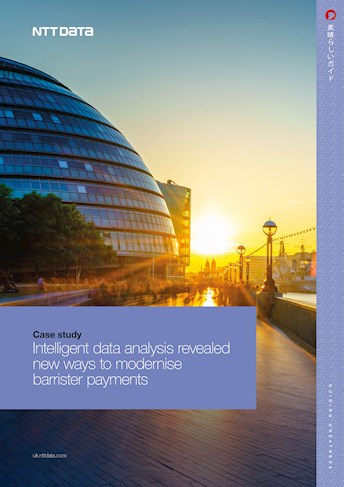 AI, and the future of society and business: A paradAIgm shift