Unravelling the data story behind The Open | NTT DATA

Unravelling the data story behind The Open

Data is integral to golf, whether it’s helping organisers improve events, deepening digital engagement with fans and spectators or helping elite players make those marginal improvements that just might move them up the leader board.

It’s ingrained at every level of the sport. Club players need only think back to just a decade or two ago when they would have bought golf clubs based on what the pro shop had in stock. Today, golfers are looking to pick the right clubs and balls to give them the launch conditions as close as possible to what the top pros achieve and that is all driven by data.

For those elite pros, data is used to study their game so they can make small incremental gains that they hope will add up to shave a shot or two off a tournament. At the top level, you are talking about tiny margins and so many will work with statisticians to look at their data to pinpoint where improvements can be made. I know of one pro who used statistics to demonstrate that he wasn’t getting the expected performance out of his 7-iron. It turned out the club had bent fractionally, meaning it had become closer to a 6-iron in loft. He would never have known, had he not taken a really close look at the data.

As with all digital developments, it’s interesting to see how the importance of data is evolving. A lot of the established elite players will look at who is doing well on the tour and check out their data to see how they are driving, how hard they’re hitting the ball, how fast the ball is travelling, together with their launch conditions. They will do this for different types of stroke within each of their rounds. They want to know what that player is getting right.

Younger players often realise they get more value by trying to improve elements of their game, so they’ll look at the data for who is the most recognised putter, short game specialist or driver of the ball. They look at their data for that individual part of their game. They tend to realise it’s a balancing act to learn from the best for each shot type, rather than trying to replicate another player’s entire game.

At The R&A, data is helping us to start out on a digital transformation journey and we’re currently at the stage of getting the foundations right.

The global pandemic brought home how essential getting our hands on reliable, robust data is. When the sad decision was made last year to postpone The Open, we went back through many years of The Open to gather information so we could run a virtual championship called ‘The Open for the Ages’. We wanted to see which of the stars of the televised era would have won if they were all playing against one another. In case you’re wondering, Jack Nicklaus won by a single shot over Tiger Woods in second place.

We found we had quite a lot of information, but it was a little sparse. It helped us realise we should set up the foundations, so we have a comprehensive view of how all the players are performing and have as few gaps as possible. This year, at Royal St George’s for example, there might be someone who surprises everyone by going from being relatively unknown to having a chance of winning on the final day. We want to be able to go back and chart that player’s progress through earlier rounds. If we didn’t capture data for every player, we wouldn’t be able to do that.

We also want people in fifty years to be thankful we started to collect as much data as possible about every shot so they can chart the progress of players rising to prominence through the years. They will likely want to compare how holes have played over the ages, where did winning players tend to land on each fairway and green, how did bunkers come into play, and how did this help evolve the course layout over the years?

As with all organisations, we’re looking for data to help us to be agile and prepared for change, whether that is running the virtual open last year or by informing our governance functions.

Technology has already helped us adapt how we engage fans through the NTT DATA Wall which presents complex data in a simple way, through rich graphics. They can see the layout of holes, where players are landing, who is driving the furthest, who is hitting the most greens, what the ball speed is for the longest drives, what angles and spin rate are associated with the most accurate drives. It’s a great way for the data to tell the story of the Championship which is being personalised through the ‘My Newsfeed’ section of the website, TheOpen.com, and Official Open app this year.

You can never make predictions about technology, but this personalised service could be embellished in years to come through Artificial Intelligence (AI). We’re looking at ways of automatically tagging every piece of video so we know who was playing the shot and on which hole, as well as multiple data points about each stroke. That will allow us to automatically identify each piece of video without having to manually tag it, so we can put together the best shots of the day or chart a particular player’s progress through the week. It could, of course, also enable fans to pick out their favourite player so they can follow them on a second screen while watching the main coverage on television.

We have already AI to good effect. During The Open in 2019, at Royal Portrush, we caught spectator reactions to each day’s shots so we could establish which were the big moments to include in a highlights reel. The crowd wasn’t filmed but their emotional reactions, roars or groans, were processed. We also think it could help with setting up the safest possible tournaments where we can monitor how crowds move around a course. That would be good for security but it would also help us make better decisions about more everyday items, such as where we should put the ice cream vans and other facilities.

Underpinning everything we do, though, is a mantra ‘we don’t do data for the sake of it’. Everything we do has to add value by offering new insights to us, as the body which stages The Open, the players and the fans. We’re setting out now on building the foundations that we hope will deliver these new insights as well as serve future generations by ensuring they have all the data they need to fully understand the story that unfolded through every stroke, hole and player at every Championship from this moment on. 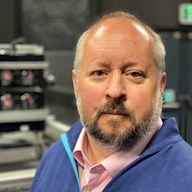