This year, we launched the 10th edition of our Open Innovation Contest, and for the first time we had two regional heats in the UK – taking place in London and Edinburgh earlier this month.

It was a great chance for a wider range of British based start-ups to take part in the contest, with twenty finalists making it to the hotly contested pitch days. The event is focused on the idea of a ‘triple-win’, as our Senior Vice President in Research and Development, Mark Masterson, explains:

“The triple-win is a successful value proposition for NTT DATA, the start-ups and our customers. Winners will get focused support – we will be working with them over the course of next year trying to find ways to develop their innovations.”

Both events were hugely exciting and eye-opening – shining a spotlight on some of the most innovative start-ups from across the UK.

And the competition was so strong it proved impossible to pick just one entrant to progress to the grand finale, with joint-winners picked in both heats.

“We provide a service that enables robotic devices to be deployed autonomously,” Unmanned Life’s Kim Clement comments. “And when you deploy these robots, you’re collecting a lot of data at the backend. Companies like our co-winner, Anomalous, have the tools to do that data processing and analysis.”

Euan Wielewski, CEO of Anomalous, adds, “The interesting thing about this competition is the judges have valued the ability for different companies to integrate and the opportunities that creates,” he says.

In London, the two winners were Iotic, with its digital twin technology, and Digital Fineprint, a data platform that builds company profiles and sell them as risk models to insurance companies.

Iotic’s Ali Nicholls was thrilled to make the grand final. “I am delighted! The quality of the other nine pitches was amazing – we did not expect it.” Digital Fineprint's founder, Erik Abrahamson, added, “I am so honoured and pleased. We’re hoping this will be the first step in a much longer collaboration with NTT DATA.”

At NTT DATA, we recognise that innovation alone is not enough – it must be coupled with sustainability. That’s why each heat also featured the Sustainable Development Goals (SDG) award.

In Edinburgh, The Data for Children Collaborative with UNICEF had a compelling pitch that struck a chord with the judges, and took home the SDG award. 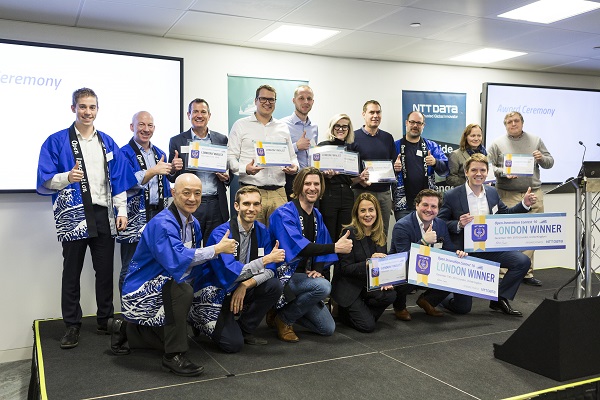 Using high-resolution aerial mapping data, they help inform UNICEF where villages are located in poorly mapped areas throughout Africa. This will enable the charity to better deploy child vaccination campaigns and get crucial medicine to locations that need it most.

“I didn’t expect anything today, so it’s really nice to get recognised,” explains Alex Hutchinson, the project’s Delivery Director. “It will help us in terms of awareness and network building. I have already had people asking how they can help, and I think building out that network of people supporting us is really important.”

TellSpec’s Isabel Hoffman was presented with the SDG Award in London – for the world’s first food scanner that can assess the make-up of what you’re eating. The company’s goal is to empower people to make healthier, less environmentally impactful food choices.

“It’s like a lab in your pocket,” says Hoffman. “We won this award, I think, because we want to change the world and make it more sustainable.”

Looking ahead, we’re excited to see all the winners from the international heats – held in 15 cities across 13 nations – in Tokyo for the grand finale next month. Together, we can help positively transform industries across the globe.