How the Indianapolis 500 raced on with support from NTT DATA

The Indianapolis 500 is the most attended single-day sporting event in the world. Considered part of the Triple Crown of Motorsports alongside the Monaco Grand Prix and the 24 Hours of Le Mans, the race is often described as the “Greatest Spectacle in Racing”.

In a ‘normal’ year, 300,000 fans cheer on a field of 33 international drivers as they take on the historic 2.5-mile oval track. The sounds of screaming fans almost rival the roar of screaming car engines, as the drivers take on 500 miles of the oval circuit at over 220mph.

But the 104th running of the event was to be unlike any other in its history. For a start, it wasn’t the day that INDYCAR had planned. The race has always taken place in the month of May, but the global pandemic conditions bumped it back to August 23rd.

Racing conditions themselves were far from normal too. With no one able to be watching from the grandstands, this year’s race looked and sounded very different as for the first time in its history the fan experience was completely remote.

Though a big change for the event, it was one that Indianapolis Motor Speedway and the NTT INDYCAR SERIES was well-prepared for. On the racetrack, at the back of the historic landmark Pagoda building, a permanent 100ft by 19ft screen was installed to showcase the digital visualisation of the action to transform the fan experience. 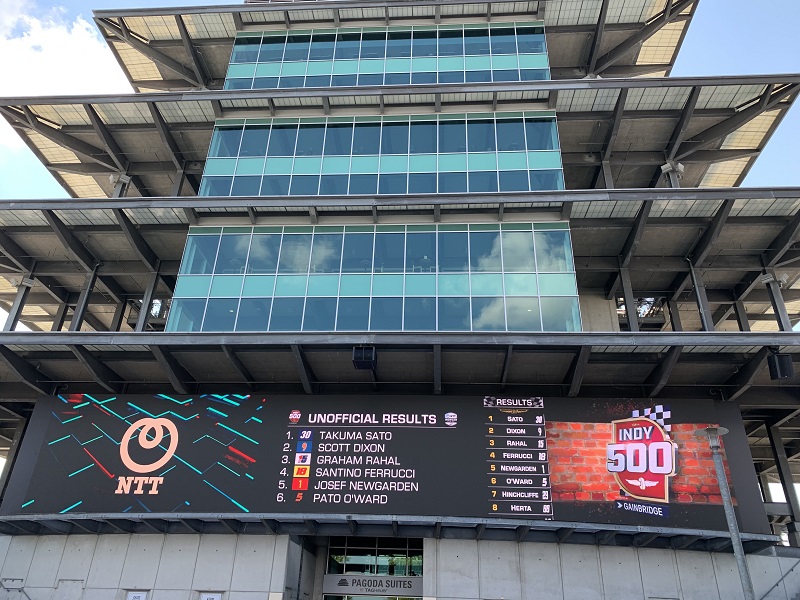 With echoes of NTT DATA’s innovative activities for patrons at golf’s oldest major championship, The Open, the high-resolution LED display and on-line streaming experience visualised tens of millions of data points and multiple live feeds throughout the track to provide data-driven insights in real-time through 3D experiences. Using machine learning, this overall Data Experience automatically provided many insights as fed from all of the action of the cars on track, pinpointing driver position battles, movements of the competitors as they progressed through the field along with the illustration of many other storylines and key data points for viewers.

The IMS Media Wall was technologically a huge undertaking: activated and managed remotely from the UK, it ingested 1,788 driver data points per second (over 22.5 million driver data points across the whole race) and 90 data points per second per car (nearly 37.5 million data points across the whole race). In total, our AI had processed 60 million data point by the end of the race. This project showcased our capabilities to present data in a creative, visually compelling and easy to understand way. Furthermore this exemplifies our commitment to make things work in an unforgiving racing environment.

While the wall would have served as the fan engagement centrepiece in a typical year, this year, the 104th running of the Indianapolis 500, was certainly nothing of the sort – which is why NTT DATA Services had also been working on enhancing the INDYCAR Mobile App.

NTT DATA’s highly rated app replicates the functionality of the media wall and goes even further. Fans watching the race could follow the on-track action with real-time leader boards with full-field track map and telemetry. They could review interesting race data points, including top speed, positions gained, pit stops, best lap, last lap, speed, gear, and laps since last pit. With the app, fans could even tune into the live in-car video to experience the event from the driver's point of view as well as hear live driver and pit crew radio transmissions. 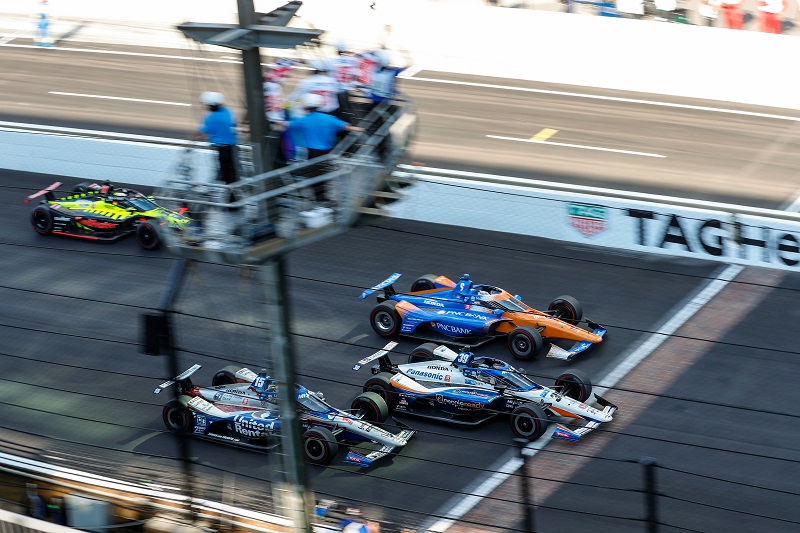 For INDYCAR, the Indianapolis 500 isn’t just a one-day race. It's an entire experience involving the community and fans everywhere lasting for over a month that requires year-round preparation by organizers and race competitors. And for a lot of fans, it’s the thing they most look forward to every year. With nobody allowed in the grandstands this year, the remote viewing experience really needed to be exceptional – and NTT DATA ensured that it was.

Nothing can quite replace being at the historic speedway to take in the massive scale and spectacle of an Indy 500 event, but our technology and innovation brought the excitement of the dynamic racing action to fans wherever they were around the world.